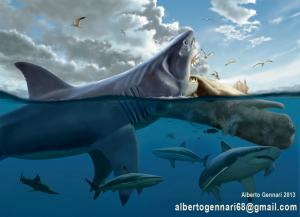 BUCKINGHAM, PA, US, January 9, 2019 /EINPresswire.com/ — Was Carcharocles megalodon, the monstrous whale eater and star of so many books and movies, an obligate scavenger? Best-selling paleo-fiction author Max Hawthorne believes that, while younger Megalodons were active hunters, adults got the lion’s share of their calories from drifting whale carcasses. http://www.kronosrising.com/megalodon-historys-mightiest-scavenger/

“It comes down to physics and tooth morphology,” said Hawthorne, who does extensive marine life research for his Kronos Rising series novels.

“It’s a known fact that, the bigger a shark gets, the slower it becomes. Part of this is increased mass, and part is the limitations of a cartilaginous skeleton. Whale sharks, which swim at three mph, grow as large as Megalodon. Yet, despite a similar diet, they’re incapable of attaining the size or speed of the planktivorous blue whale. Agility-wise, cartilage is terrific for normal-sized sharks and benefited smaller Megalodons, but a fifty-ton adult was undoubtedly a cumbersome animal.”

Hawthorne says his findings are supported by changes that take place in the shark’s enormous teeth – over seven inches in the largest adults.

“At birth, Megalodon teeth are virtually identical to a great white’s – sharp, triangular blades with nasty serrations. But unlike the white shark’s, whose teeth remain relatively unchanged at adult sizes, the Megalodon’s become thicker, blunter, with tiny serrations. They change from steak knives to bone chisels with hacksaw-like edges.” http://www.kronosrising.com/secret-behind-megalodons-bite-by-max-hawthorne/

The author concludes that adult Megalodons, struggling to chase down fleeter whales, often resorted to appropriating whale carcasses from smaller sharks. Unfortunately, said carcasses were often stripped, forcing the shark to target whatever protein remained. In this case, the whale’s heart and lungs, shielded behind thick ribs. “The maxillary teeth of Megalodon function like sharp-edged wedges and are perfectly designed to slip between whale ribs and split them apart,” Hawthorne intimated. “It could crack open a whale’s rib cage like a nutcracker cracking a nut. We know this happened, because many fossilized whale ribs bear evidence of being shattered by Megalodon.”
https://www.nationalgeographic.com/science/phenomena/2014/08/13/megalodon-the-monster-sharks-dead/

When asked if this dietary change made the shark any less fearsome, Hawthorne quipped, “Less fearsome? I wouldn’t want to be in the water with one!”

The “Kronos Rising” series is available through Amazon and Barnes & Noble.