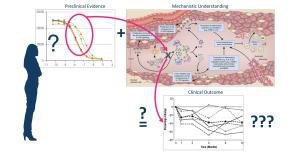 These case studies show the value of PhysioPD Research, and our ability to reduce and front-load risk, which has had a transformative impact on the economics of drug development for our clients.”
— Ron Beaver, Founder, Chairman and CEO of Rosa & Co.

“Since our appearance at the first American Conference on Pharmacometrics eleven years ago, this has been a premier forum for Rosa,” said Ron Beaver, Founder, Chairman and CEO of Rosa & Co. “These case studies are further evidence of the value delivered by PhysioPD Research, and our ability to reduce and front-load risk, which has had a transformative impact on the economics of drug development for our clients.”

PhysioPD Research with the Platform determined that GRP119 agonists can be moderately effective in treating T2D, depending on the PK and PD properties. The new candidate may also be effective for treating T2D, particularly in combination therapy with sitagliptin, and should be investigated further.

Leveraging a Diabetes QSP Model to Drive Decisions in Target Identification and Validation for a Proinsulin to Insulin Conversion Therapy (with Merck & Co., Inc.)

We used a diabetes QSP model to assess whether the development of peptides engineered to convert proinsulin to insulin in the blood would provide therapeutic value in T2DM.

In-silico hypothesis testing included: addition and qualification of proinsulin biology into our diabetes QSP model; creation of virtual patients to determine whether proinsulin conversion therapy may provide value; and simulation of a phase 3 clinical trial with relevant endpoints and additional mechanistic readouts to interrogate and interpret results.

The lack of projected impact on HbA1C through conversion of proinsulin to insulin was not intuitive prior to the in-silico hypothesis testing using QSP approaches. Simulation results were examined and challenged, and led to a recommendation not to pursue proinsulin conversion as a potential T2DM therapy.

The aim of this study was to develop a QSP model of Alzheimer’s Disease (AD) pathologies to assess the impact of investigational treatments in support of drug development in this progressive irreversible neurodegenerative disease with a high unmet medical need.

We developed a comprehensive QSP model which included the two defining features of AD pathology: Aβ production and aggregation to form dense plaques, and tau hyperphosphorylation, aggregation, and intracellular and extracellular spreading leading to generation of neurofibrillary tangles (NFT). The model tracks the production, aggregation, transport dynamics and clearance of biological species involved in these mechanisms in the brain, CSF, and plasma, as well as the impact of investigational treatments on these processes.

The model facilitated a quantitative assessment of the effect of several therapeutic agents in development on Aβ plaque and NFTs in the brain and on soluble biomarker dynamics.

Development of a Mechanistic Representation of a Stable Solid Tumor

A challenge in mechanistic modeling of a solid tumor in late-stage cancer is to accurately represent progressive tumor growth in untreated conditions and stable disease in response to immunotherapy. Published oncology models generally represent either complete resolution or tumor progression after treatment. Our goal was to create a virtual tumor which initially responds to treatment but then remains stable, and to identify key factors responsible for the stability.

Mechanistic modeling identified critical factors that can lead to a stable response to immunotherapy, preventing tumor escape, but also preventing complete tumor regression. The model provides a framework for further research into understanding patients and tumor characteristics driving tumor escape versus stable disease or tumor regression under various treatments, and the development of more effective therapies to either exploit or overcome these mechanisms.

QSP models reduce uncertainty and provide learnings that inform future decision-making. But what are these modeling results worth? We lay out a framework for determining the economic value of QSP modeling.

We apply concepts from the professional discipline of Decision Analysis to illustrate the economic value of reducing uncertainty about the biological hypotheses underlying proposed investments in pharmaceutical drugs, thus informing future program or portfolio decisions.

Two cases of using PhysioPD Research to inform drug development for children are presented: 1) A QSP model was constructed in order to better understand the possible causes of variability in response to the bile acid ursodiol in neonates. 2) QSP modeling was used in an immuno-oncology application to extrapolate from clinical trial results in adults to likely results in children to increase confidence in dosing in this vulnerable population.

In both cases, a QSP model was constructed and tested using data for adults and then converted to represent the pediatric population of interest by introducing known mechanistic differences between adults and children. This approach enables drug developers to better predict pediatric responses to therapies, to refine protocols, and to develop drugs for children in a safer and more efficient manner.

Rosa & Co was established in 2002 and is known worldwide for its PhysioPD™ Research Platforms which elucidate the connection between disease mechanisms, therapeutic interventions, and clinical outcomes. PhysioPD Research delivers credible scientific insights and actionable program impact that would be difficult or impossible to achieve with any other research approach.