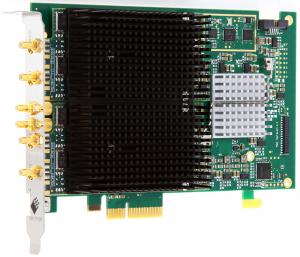 Reproducing high quality signals is invaluable to engineers and scientists to stimulate a system or component with waveforms that are high precision, easily adapted, and mimic real conditions.”
— Oliver Rovini, CTO at Spectrum

GROSSHANSDORF, HAMBURG, GERMANY, November 26, 2019 /EINPresswire.com/ — Spectrum Instrumentation has added six new Arbitrary Waveform Generators (AWGs) to its recently released M2p.65 xx series of PCIe cards. The new AWGs extend the product family’s capabilities by boosting the available output range, so that waveforms can be generated with amplitude swings of up to ±12 V into 1 MOhms or ±6 V into 50 Ohms. To achieve the higher output voltage ranges, the cards have been fitted with additional amplification and larger cooling plates. This makes the cards a little wider, so that they occupy two PCIe slots, but they are still just 168 mm in length. The small size allows them to fit into almost any PC, turning it into a powerful and flexible waveform generator.

The M2p.65xx series AWGs use the latest 16-bit Digital-to-Analog Converters and feature a fast PCIe x4 interface with up to 700 MByte/s streaming speed. Users can select output speed rates of either 40 MS/s (M2p.654x series) or 125 MS/s (M2p.657x series) and models with one, two or four channels per card.

Oliver Rovini, CTO at Spectrum, said: “One of the main limitations of most AWGs is their ability to generate accurate high amplitude waveforms. These new AWG cards offer a cost-effective solution in one fully integrated package. As such, they should be of interest to anybody wanting to generate larger test signals in the DC to 60 MHz range. The ability to reproduce high quality signals is always valuable to engineers and scientists who need to stimulate a system or component with waveforms that are high precision, easily adapted, and mimic real operational conditions.”

Create a limitless Array of Waveforms
To allow the M2p.65xx series AWGs to generate long and complex waveforms, each card comes equipped with a generous 512 MSamples of on-board memory. The large memory is complemented by a variety of different output modes. For example, the memory can be segmented and waveforms can be created by looping on and switching between different segments. The cards also feature a FIFO streaming capability that enables new waveform data to be read over the fast PCIe bus (at rates of up to 700 MB/s) while replaying already transferred information. This flexibility allows users to create ultra-long, single shot waveforms or constantly changing, burst-type signals such as those found in communications, radar, ultrasound, LIDAR or sonar systems. The possibilities are almost limitless.

Stimulus-Response Systems
For applications that require the connection of AWGs and Digitizers, such as stimulus-response or closed-loop applications, Spectrum’s Star-Hub piggy-back module synchronizes up to 16 different M2p class products. The new M2p.65xx AWGs match perfectly with the M2p.59xx 16-bit digitizers released in 2018. The M2p.59xx digitizers offer one to eight channels with sampling rates between 5 MS/s and 125 MS/s. The Star-Hub distributes a common clock and trigger signal to each channel ensuring fully synchronous operation. Star-Hub systems are also perfect for situations where multiple test points or arrays of sensors need to be stimulated by different test signals at the same time.

Easy AWG control and Signal Generation
Controlling and generating signals with the Spectrum AWGs is also easy and straight forward. The cards are fully programmable and drivers are provided, free of charge, to support the most popular languages (such as C++, VB.NET, C#, J#, Delphi, Java or Python code) as well as third party software tools like LabVIEW and MATLAB. Alternatively, users can simply run Spectrum’s own software, SBench 6 Professional.
SBench 6 enables the user to control all the modes and settings of the AWG via a simple, easy-to-use, interface. The software is designed to support multi-channel operation and has a host of built-in features for waveform display, signal generation, data analysis and documentation. Basic signals can be created using the software’s EasyGenerator function that produces waveforms like sine waves, triangles or rectangles with programmable frequency, amplitude and phase. More complex signals can be created using mathematical equations or imported from other programs or devices (such as digitizers or oscilloscopes) using Binary, ASCII, or Wave formats.

Integrate into any Test System
Once installed in a PC, the AWG cards are easy to integrate with other test and measurement devices. The signal outputs as well as clock and trigger inputs are provided via front-panel SMB connectors. The front-panel also hosts four MMCX connectors (one multi-function output, and three multi-function I/O lines), which can be used for different tasks such as digital output channels, clock, trigger or status output as well as asynchronous I/O lines. This high level of connectivity allows the AWG cards to be easily adapted into most automated test system environments.

Mixed Mode AWG
Switching the multi-purpose I/O lines to digital output adds another four synchronous output channels to the AWG. A single AWG card can then generate four analogue outputs and four digital outputs in parallel with full speed. This is especially helpful when interfacing with external equipment in experiment control or for OEM projects.

Five Year Warranty
The Spectrum M2p.65xx series AWGs are in full production and available for immediate delivery. All cards are shipped factory tested and include a base version of Spectrum's SBench 6 software for first tests. “The M2p series AWG products represent the culmination of nearly 30 years of PC-based instrumentation design and production. As a result, we’re proud to give an industry-leading, five-year warranty on our products,” stated CEO Gisela Hassler. “Furthermore, software and firmware updates are free of charge for the lifetime of the product. Support is done directly by our skilled in-house team of engineers – normally within a couple of hours after receiving the request.”