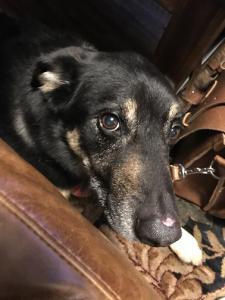 Opus, a Shepherd, was treated for osteoarthritis in his hips with VetStem Regenerative Cell Therapy by Dr. Jerrold Bausman of VCA Vet Specialists of the Valley.

Opus runs around the yard as if he were a 3-year-old. I'm very happy with the procedure.”
— Opus' Owner

POWAY, CALIFORNIA, USA, February 11, 2020 /EINPresswire.com/ — Opus, a German Shepherd, was around six years old when he began to show symptoms of osteoarthritis in his hips. Opus was diagnosed with bilateral hip dysplasia and was prescribed pain medication as well as a nonsteroidal anti-inflammatory (NSAID) to help keep him comfortable. His owner reported that he was maintained on these medications for approximately two years before he started to slow down again.

Opus’ veterinarian, Dr. Jerrold Bausman of VCA Veterinary Specialists of the Valley, had been discussing VetStem Cell Therapy as a potential treatment option for Opus. Dr. Bausman and Opus’ owner decided to pursue stem cell therapy once his medications began to lose their effectiveness. When Opus was just over eight years old, his symptoms began to get worse. At that time, his owner elected to move forward with stem cell therapy.

To begin the process, Dr. Bausman collected fat from Opus’ abdomen in a minimally invasive anesthetic procedure. The fat was aseptically packaged and sent to the VetStem laboratory in Poway, California. Once received, VetStem lab technicians processed the fat to extract Opus’ stem and regenerative cells for injectable stem cell doses. Opus’ stem cell injections were sent back to Dr. Bausman and Opus received one injection into each hip.

According to his owner, Opus had a great response to the stem cell treatment. After the therapy, he was able to discontinue his use of NSAIDs. Opus’ owner stated, “Opus runs around the yard as if he were a 3-year-old. I'm very happy with the procedure.”

Stem cells are regenerative cells that can differentiate into many tissue types, reduce pain and inflammation, help to restore range of motion, and stimulate regeneration of tendon, ligament and joint tissues. In a peer-reviewed study of dogs with chronic osteoarthritis of the hip it was found that stem cells reduced lameness and pain.

About Jerrold Bausman, DVM
Dr. Bausman received his DVM from Kansas State University. Following veterinary school, he completed a one-year internship in small animal medicine, surgery and critical care at Southwest Veterinary Hospital in Tucson, Arizona. Thereafter he successfully completed a small animal surgical internship and residency at Animal Specialty Group in Los Angeles, CA where he remained as a staff surgeon until becoming a partner at his current hospital. Dr. Bausman has been utilizing VetStem Cell Therapy since 2007.

About VetStem Biopharma, Inc.
VetStem Biopharma is a veterinarian-led Company that was formed in 2002 to bring regenerative medicine to the profession. This privately held biopharmaceutical enterprise, based near San Diego, California, currently offers veterinarians an autologous stem cell processing service (from patients’ own fat tissue) among other regenerative modalities. With a unique expertise acquired over the past 15 years and 17,000 treatments by veterinarians for joint, tendon or ligament issues, VetStem has made regenerative medicine applications a therapeutic reality. The VetStem team is focused on developing new clinically practical and affordable veterinary solutions that leverage the natural restorative abilities present in all living creatures. In addition to its own portfolio of patents, VetStem holds exclusive global veterinary licenses to a large portfolio of issued patents in the field of regenerative medicine.