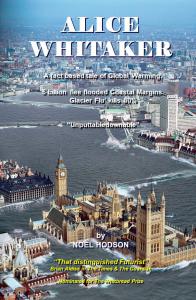 OXFORD, UK, January 15, 2021 /EINPresswire.com/ — As President Trump leaves the White House he has signed executive orders that dilute environmental protections in Alaska and the Arctic. His decisions could be good for American business; supporters claim that further exploiting Arctic timber, oil and gas deposits will not harm the US and will create thousands of jobs. Environmentalists fear that driving industry into the northern territories and pristine Arctic will accelerate global warming, lead to Arctic meltdown, and endanger species and the planet. Whichever camp is right, the end of Trump's turbulent term of office is a pivotal time for the science, commerce and politics of the near, medium and long term future of the planet.

Noel Hodson, in 1979 built the prototype Petrol-Electric hybrid car MIcrodot. He is a business planner and business change analyst who has lobbied since 1987 for policies that boost business while steering commerce towards a sustainable green future. His 1992 seminal work Teleworking Explained (Wiley & Sons) with US Telecommuting guru Gil Gordon, has at last, 30 years later, become mainstream policy for most major US and EU employers. The global giant Unilever today announced that to limit Coronavirus, that at least 30% of its staff will continue to work from home; to the dismay of city-centre landlords. Unilever is not alone and certainly not the first. In 1990-92 global multinational British Telecom emptied three high-rise London City office-blocks and gave them back to the landlords, sacrificing valuable long-leases in favour of allowing hundreds to work from home. A combination of the invention of the enabling technologies (1987-2020) and the measures to stop the Covid-19 pandemic (2021) has now boosted telecommuting. IBM and AT&T both embraced telecommuting back in 1990, with flexible work contracts and thousands of laptops issued to employees.

Hodson found that textbooks and economic analyses had very limited audiences in most countries. The early ambition to reduce commuting "Take the Work to the People – Not the People to the Work" promoted by innovative Californian Jack Nilles, did not catch-fire – even as wildfires, storms and hurricanes increased in number and intensity. In a bid to win popular understanding, Hodson wrote two novels, the utopian AD2516-After Global Warming, based on current advances in science and the dystopian The Wisdom of Alice Whitaker. This contemporary second novel tracks polar-meltdown, flooding New York and London, and based on the reality of Bird-Flu and other coronavirus epidemics, conjures up a killer coronavirus pandemic Glacier-Flu that kills 80% of humans, The inspired heroine, Alice Whitaker, initiates a new political order which evolves into a new world democracy, Again, thanks to Covid-19, both these novels are at last being read by the public and opinion formers. Everyone in the world, including President Trump, should read them, particularly in The Time of Covid.

Will Trump's golden villa Mar-a-Lago be inundated by the Caribbean waves – or will he heed the warnings in these very accessible novels and prepare sea defences that will ensure the survival of his dynasty? The main message of the business text books and the prophetic novels is Move to Higher Ground.