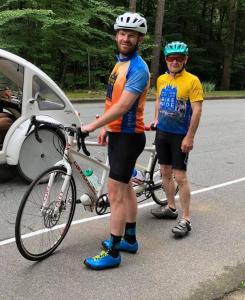 The partnership with Penn Medicine Orphan Disease Center has generated international interest in CHM as well as the opportunity to accelerate research for new treatments and a cure for choroideremia.”
— Kathi Wagner

SPRINGFIELD, MA, UNITED STATES, September 14, 2021 /EINPresswire.com/ — The Choroideremia Research Foundation (CRF) is thrilled to announce its fourth-consecutive annual contribution to the Penn Medicine Orphan Disease Center Million Dollar Bike Ride (MDBR). Since 2018, CRF has raised $218,000 in support of the MDBR and has received $140,000 in matching gifts from the Center.

Over 50 ‘Team CHM’ fundraisers and cyclists affiliated with the CRF have participated in the annual fundraising event since 2018, resulting in over 1,200 individual gifts. One-hundred percent of these gifts support research grants toward a treatment or cure for Choroideremia (CHM). CHM is a rare inherited disorder that causes progressive vision loss and ultimately leads to complete blindness.

Thanks to the MDBR collaboration, in 2021, Penn Medicine Orphan Disease Center will award one grant for $64,360 to initiate or advance research for CHM. Applications will be considered for research including gene therapy, CRISPR, stem cell therapy or other methods that will potentially halt the progression of CHM and/or restore retinal functioning. Letters of Interest are due Thursday, September 16, 2021 by 8:30 pm. For more information, click here.

“The partnership with Penn Medicine Orphan Disease Center has generated tremendous international interest in CHM as well as the opportunity to accelerate research for new treatment options and a cure for choroideremia,” said Kathi Wagner, Executive Director of the CRF.

About Choroideremia
Choroideremia (CHM) is a rare inherited form of blindness affecting approximately 1 in 50,000 people. Due to its x-linked inheritance pattern males are most severely affected with females usually experiencing much milder visual impairment. Symptoms begin in early childhood with night blindness and restriction of visual field being the earliest noticeable effects, eventually progressing to complete blindness. An estimated 6,000 people in the United States and 10,000 in the European Union are impacted by Choroideremia. There are currently no approved treatments for Choroideremia.

About the Choroideremia Research Foundation Inc.
The Choroideremia Research Foundation was founded in 2000 as an international fundraising and patient advocacy organization to stimulate research on CHM. Since its inception, the CRF has provided over $4 million in research awards and is the largest financial supporter of CHM research worldwide. Research funded by the CRF has led to the development of a CHM animal model, the pre-clinical production of gene therapy vectors currently in clinical trials, and the CRF Biobank which stores tissue and stem cell samples donated by CHM patients. For more information, visit www.curechm.org